Shifting Centre of Gravity of US Fossil Fuel Production 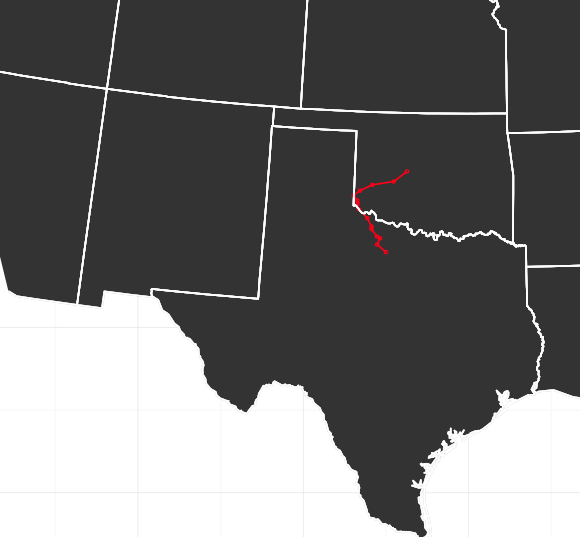 My research Fracking Growth investigates the localised impacts of the current oil and gas production boom in the US. The boom is triggered by extraction of oil and gas deposits, that were previously not possible to exploit. The shale deposits have become technologically recoverable due to a combination of horizontal drilling technology and hydraulic fracturing, which is extremely controversial as it involves injection of significant amounts of water, sands fused with chemicals beneath the surface.

The fact that these shale deposits are geographically located in distinct places within the US can be highlighted through a very simple graph.

Taking Energy Information Administration state level crude-oil and natural gas (marketed) production data, we can compute a “center of gravity” of US fossil fuel production – simply by weighting the state centroid coordinates by the energy content of the fossil fuels being extracted (or by their dollar value).

The resulting two pictures are worth sharing, because they highlight the dramatic changes that have happened in only recent years.

Note that here I am plotting 14 years of data, from 1998 to 2012. What you can see is striking: the centre of gravity of fossil fuel production by heat content has moved clearly towards the north for the whole period, but has made a decided shift towards the East within the past four years. This represents the dramatic production expansion for natural gas in the Marcellus shale formation.

Now natural gas is becoming significantly cheaper in the US, as the US essentially becomes a net exporter and is self-sufficient. This allows domestic prices to be significantly lower than elsewhere. In the US, natural gas is now cheaper by a factor of three compared to the UK. This emulates policy makers around the world to consider revising rules of fracking legislation, to stimulate their economies in a similar way. In the UK , most recently, land access rules have been changed to make fracking easier.

The fact that US natural gas prices are now dramatically lower than crude oil prices, when comparing them to their respective energy content has implications for how you plot the centre of gravity.

If you plot it by fossil fuel value, the picture is dramatically different.

Plotting Centre of Gravity by Fossil Fuel Value (in USD)

Here, the move in the centre of gravity knows only one direction. It is moving decidedly north west. This is driven by the Bakken oil boom.

It is clear that the two pictures indicate the possibility for their to be dramatic limitations when it comes to physical infrastructure. The sudden and quick relocation of production has put strains on the US physical infrastructure to carry crude oil and natural gas to the market. This is a core argument in my research, and I think this is bound to stay for a while, as the regulatory process and construction time for new pipelines and upgrading of refinery capacity is bound to take a few years.

Note that my approach to the graph is similar to Danny Quah’s work on studying the centre of economic activity around the world, except that I do not have to worry about projection issues too much (the center of gravity could be beneath the surface of the world in a truely 3-dimensional world).

Given a shapefile of US states, that you can e.g. obtain from the GADM , you can compute the centroid of the geographies using the gCentroid function that is part of the rgeos package.